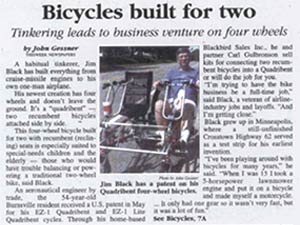 5/30/03 Article in This Week
by John Gessner
​
A habitual tinkerer, Jim Black has built everything from cruise-missile engines to his own one-man airplane.
His newest creation has four wheels and doesn't leave the ground. It's a "quadribent" — two recumbent bicycles attahed side by side.
This four-wheel bicycle built for two with recumbent (reclining) seats is especially suited to special needs children and the elderly — those who would have trouble balancing or powering a traditional two-wheel bike, said Black.
An aeronautical engineer by trade, the 54-year-old Burnsville resident received a U.S. patent in May for his EZ-1 Quadribent and EZ-1 Lite Quadribent cycles. Through his home-based [Blackbird Designs, Inc.], ... connecting two recumbent bicycles into a Quadribent.....
"I'm trying to have the bike business be a full-time job," said Black, a veteran of airline-industry jobs and layoffs. "And I'm getting close."
Black grew up in Minneapolis where a still-unfinished Crosstown Highway 62 served as a test strip for his earliest invention.
"I've been playing around with bicycles for many years," he said. When I was 15 I took a 5-horsepower lawnmower engine and put it on a bicycle and made myself a motorcycle. It only had one gear and wasn't very fast, but it was a lot of fun."
His career resume includes engineering jobs with Boeing, Piper Aircraft, Lear Jet and Williams International.
At Williams International, he worked on the small jet engines used in the U.S. cruise missiles fired during both wars in Iraq. At Northwest, Black was the senior engineer in charge of maintaining $400 million worth of DC-10 engines.
After Northwest laid him off 10 years ago, Black went to work for himself, offering design engineering services through his Blackbird Designs Inc. — the company that also holds the Quadribent patents.
He first thought of building a four-wheel recumbent bicycle for his grandparents, who were in their 80s and under pressure from family members to quit driving a car.
“This is what they needed,” Black said. “I wasn’t able to do it for them, but this is kind of where it got started.”
He converted two BMX bikes into a four-wheel “car” for his then-9-year-old daughter, Amanda, who will graduate this month from Burnsville High School.
“So then I started making recumbent bicycles from BMX bikes for adults,” Black said. “And then I joined two of them together side by side. People started asking for them so I started building them for people and selling them.”
Attached, side-by-side bikes are nothing new, Black noted. “One-hundred years ago they’d put two upright bikes together and call it a sociable,” he said. “I tell people I can make your recumbent a little bit more sociable.”
[Other manufacturers] “...they’re at least twice the price,” said Black.... “And some of them don’t have as many speeds as these. These have 21 to 24 speeds as standard, and we have an electric motor option.”
[Blackbird Designs, Inc.] also offers adaptive equipment. One piece of gear connects the pedals of both bikes, combining the effort of two riders. A physically challenged rider contributes as much as he or she is able while the person in the next bike does most of the work.
“It helps them exercise,” Black said. “They contribute as much as they can, and the parent or the physical therapist is right next to them and can see how they’re doing and help them out.”
[Blackbird Designs, Inc.] also offers a chest-level seat belt for physically challenged riders.
“Some of these kids have never been on a bike before,” Black said. “They’re nervous, and some are really scared. But it’s really nice to have a child come back with a big smile on their face.”
John Gessner is at burnsville.thisweek@ecm-inc.com.
Get a Price Quote